Creating a beautiful nursery on a budget may seem like an impossible task as you scroll through Pinterest and see people recommending expensive baby gear to create your dream nursery.

During my most recent pregnancy we were in the process of moving (ended up closing on a home when I was 8 months pregnant), but despite all of the chaos, I knew I wanted baby Elegance to have a beautiful nursery AND didn’t want to spend a ton of money making it happen.

Therefore, today I wanted to share my best tips for designing a beautiful nursery on a budget.

One of the first things to do when planning to design a nursery on a budget is to make a wishlist. This can be done via a Pinterest board or even on a specific site.

For me, I chose to do an Amazon wishlist as when I found out I was expecting I started one with baby items I needed to purchase, and since I planned to do most of the nursery shopping at Amazon it was easier to just utilize their wishlist function. However, for other projects, I have made private Pinterest wishlist boards.

My recommendation is when you’re starting to create your wishlist that you don’t focus too much on price. Instead, put your must have’s and wants all on the wishlist regardless of price as you can comparison shop later down the line and the item may fit within your budget.

For example, once we decided upon a theme for the nursery (Elephants) I put any and everything that was elephant nursery-related on my wishlist so I could deep dive into the reviews, pricing, etc later.

If you aren’t in any Amazon Facebook deal groups and plan to get the majority of your nursery items from Amazon you need to join some now.

It wasn’t until I was about 7 months pregnant that I stumbled across these and boy was I pissed because many of the items that I had already purchased at full price could have been purchased for 50% less than what I paid.

However, thankfully, I didn’t ramp up with shopping my nursery wishlist until we had moved into the new house, so I was able to score all of the decor items featured in Elegance’s nursery for less than I expected AND even added in some additions that I wasn’t considering.

For example, the lights that are behind her crib and the star projector were additions added thanks to 70% off deals seen in the Amazon Facebook deals groups.

NOTE: Join these groups at your own risk as they post deals 24/7 and you may find yourself ordering things you probably wouldn’t have ordered without the deal. Alternatively, if you don’t use Facebook, you can join Rakuten and get cashback on your shopping purchases.

Usually, I’m not a fan of Facebook mom groups because they seem to be filled with mom-shaming and drama. However, it was refreshing to see that when joining the Facebook due date group that this wasn’t the case at all.

Plus, since these groups are filled with moms who are at the same stage of their pregnancy journey as you, there’s a lot of talk about setting up nurseries and moms sharing their completed nurseries.

Unlike the Facebook deal groups, the expectant mom Facebook groups won’t necessarily be giving out budget-friendly nursery advice. However, they are great for getting some inspiration regarding how you want to set up the nursery if you have no ideas.

AND you can show off your nursery once it’s complete and get feedback or just humbly brag to people who can appreciate why you’re so excited about setting up a room in your house that you’ll hardly use for an extended amount of time lol.

For example, in the group, I joined I was able to get the idea of putting a cute door sign on Elegance’s door, from another mom’s nursery on a budget reveal.

I’ve sold stuff on Offer Up and Craigslist before, however, I must admit that it had been a minute since I purchased something used.

Boy, have I been missing out apparently!

Before making any large purchases (i.e. nursery furniture) I’d recommend checking Facebook Marketplace and your Nextdoor app to see what others are getting rid of.

For example, I was browsing Nextdoor one night and came across a barely used dresser, glider, and crib that converts into a daybed/toddler bed for $100.

Turns out grandparents were selling their nursery furniture that their grandchild only used a few times so it was basically brand new!

By purchasing the three most expensive nursery items used I was able to have more of a budget to spend on other areas of the nursery and of course cute baby clothes.

Apparently, good deals on hardly used nursery items are not hard to come by (at least in my area) because the following week on Facebook Marketplace I saw someone selling a dresser, changing table, crib, and glider for $150.

So my advice to you is don’t shut down the idea of purchasing used nursery items as you can come across some like new items.

Don’t try to purchase everything all at once

Sales are always happening at the spur of the moment so shop your nursery wishlist piece by piece to make sure that you’re getting the best deal.

Nothing is worst than purchasing something at full price and then seeing that in a couple of days it gets marked down.

While I get wanting to have everything done and out of the way before you’re too uncomfortable, in the beginning, you can focus on getting the larger furniture items and getting the room painted and let everything else fall into place as it happens.

The reality for most parents is that the nursery isn’t going to be used for at least six months or so, therefore, having everything perfect before your baby is born isn’t a requirement.

In fact, while the majority of Elegance’s nursery is done, it didn’t come together until about 2 weeks after she was born and I still have to organize the closet and add in a few more decor pieces.

You can design a beautiful nursery on a budget

Designing a beautiful nursery on a budget of about $500 or so can be done. You just have to look for deals, space out the purchases, and get inspiration from other expectant moms.

Creating a nursery should be a fun experience and shouldn’t cause you any stress at all.

If you found this article to be useful make sure you check out my Babyproofing Checklist. 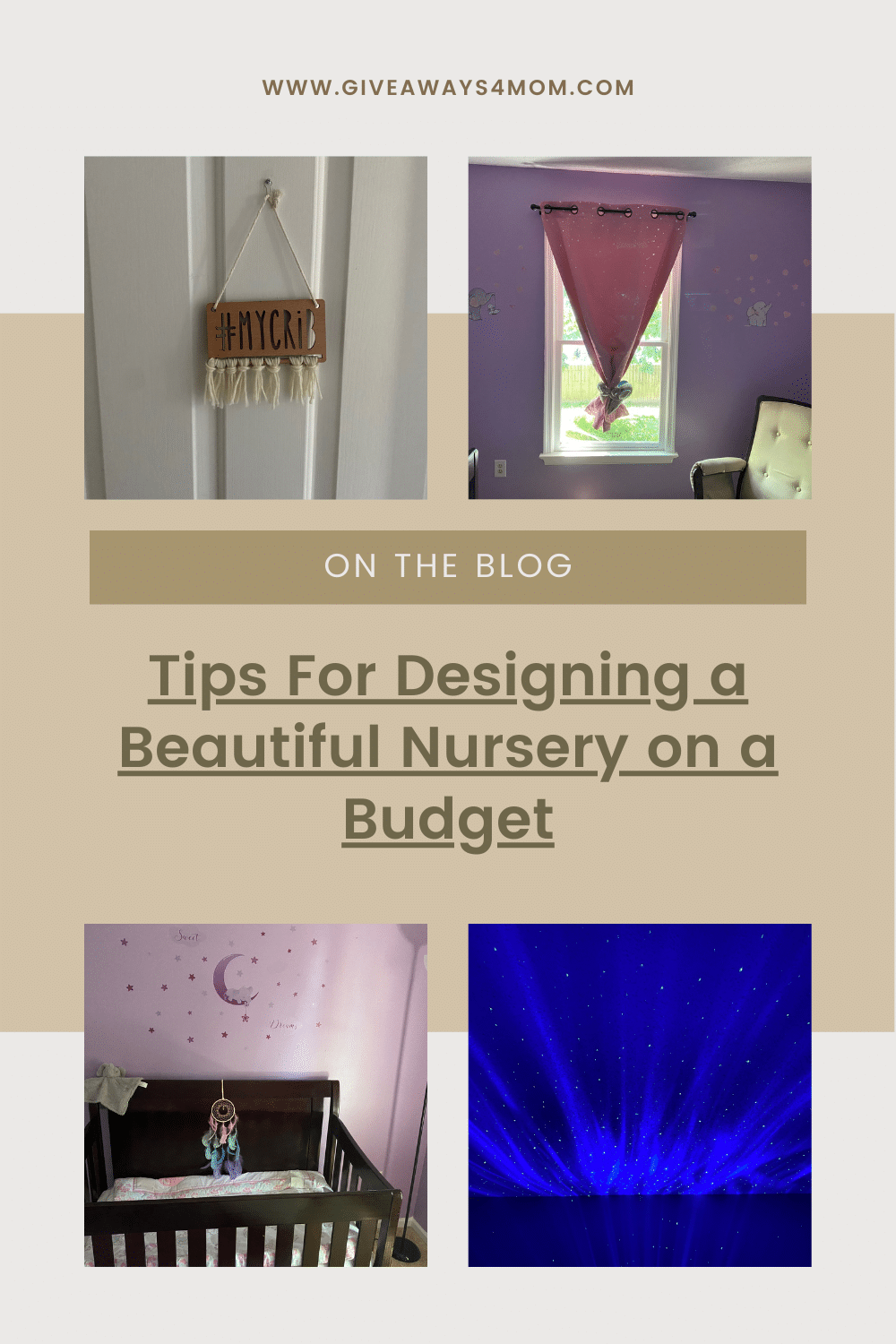